CCPC last visited Cherry Tree in 2005, so when it appeared on the Meets List I was keen to reacquaint myself with it. Four of us eventually made it to the meeting point where the Pennine Way crosses the road from Malham Tarn. Steve and Keith had travelled up together and asked permission to visit the cave at Darnbrook House, a mile up the road. Darnbrook House is the location for Robinson's Pot, which Crewe visited a couple of years ago. Those that went on the trip will remember that the entrance shaft is directly underneath the farmhouse kitchen window!

Grace and I travelled over from Sheffield, via Malham, giving Grace her first view of the Cove. The weather was bright, dry, warm and very clear with fantastic views from where we parked. The walk to the cave starts up the Pennine Way, then turns off on another footpath across a couple of fields. This would be a perfect area to get very lost in in mist, but with the clear visibility and the aid of a map we found the entrance, with the eponymous cherry tree still clinging to the rock face. I wasn't sure of the climb down to the first pitch, but Keith demonstrated that it was more intimidating than difficult.

Since our last visit a new first pitch has been excavated, with the original entrance left for the bats. I rigged this from the scaffolding with a 30m rope. From the bottom I then climbed down a short pitch in shattered rock to a chamber with no way on. This set the tone for the whole of the rest of the entrance series, where we managed to take every single wrong turn possible. We now know the entrance series in intimate detail! 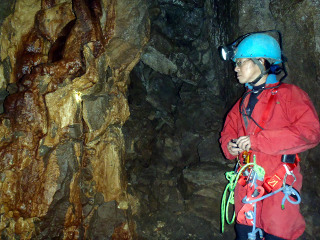 Grace in the blind chamber near the entrance

Finally we found the obvious junction in to Crossover Passage and made our way via Quicksand Aven to Main Junction. The explorers of this cave clearly didn't use much imagination in their naming. I can only assume that Quicksand Aven was named by the second explorer... 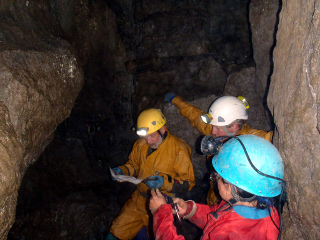 Keith Joule studies the survey. Steve and Grace look on

From Main Junction we went left along South Stream Passage to Large Chamber (again with the obvious names). At the end of Large Chamber Keith led us up to a squeeze along a muddy bedding plane that bypassed a chimney climb up to Spiral Chamber. We spotted a stal boss with a spiral pattern that we reckon gave it the name. Keith was keen to find the second pitch that leads down to a sump, though we had not bought a rope for it. We followed Keith down in to a passage with poised blocks, squeezes and climbs till we found a stream heading up. Keith returned after a while and said that he had found himself back in South Stream Passage. Eventually we worked out that we had been turned through 180 degrees and had been traveling underneath Spiral and Large Chambers at a lower level. Not giving up, Keith finally found his pitch and happy, we returned to Main Junction to head along Far Stream Passage. Part way along, Grace and I turned back. I was suffering the after effects of the previous nights party. Steve and Keith made their way through the intimidating low air space duck that leads to the well decorated Aurora Hall. Beyond Aurora they found themselves in a passage filled with boulders requiring convoluted moves to negotiate. They decided that this was enough for the day, turning back just before Blackstone Hall and headed for the surface. 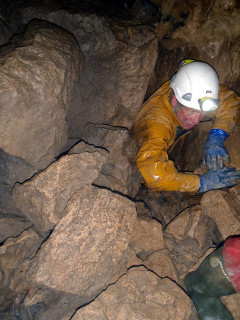 After getting changed again in sunshine we went our separate ways. Grace and I stopped off at Kilnsey Crag to marvel at the climbing routes negotiating the roof.

Cherry Tree is an unusual cave for the Dales. It is mostly horizontal and changes character almost every few yards. A lot of the rock is shattered and there are many loose and precariously stacked boulders. Care needs to be taken.