Two films made by the late Ralph Johnson can now be viewed on the site. The Astbury Hydraulic Lime Company and Mow Cop Tunnels and Tramways. These were originally placed on line by the Mow Cop Interactive site, with permission from Ralph.

Derbyshire Caving Association have issued a statement on caving activities with the continuing pandemic. It covers the practicalities of meeting the current lock down requirements, keeping on good terms with the land owners, tenants and local residents on who we rely for access and the situation with rescue. Club trips are still not practical for both common sense reasons and being legal. In the mean time, the club has been keeping in touch by holding our monthly meetings via Zoom. This has allowed some members who live further away from our usual pub to attend, who we would not normally see.

Lock down means no caving. Our training officer Mark Krause has been giving us various exercises, like new knots to learn, to try and keep us amused. Caving fitness is draining away, as the only thing that really gets and keeps you cave fit is to go caving. The Web Wrangler has updated the picture Gallery pages by adding Lightbox to display screen filling pictures.

While caving is effectively banned, club members have been finding other things to do. Mark Lovatt has been scanning in old photographs. Some from the mid '70's at Knotlow Caverns can be seen on this gallery page.

Mark Krause has arranged for some Buffs Wufflers to be made available with the club logo in two styles, large/small logo and a variety of colours. A picture of a large logo one below in white on black. 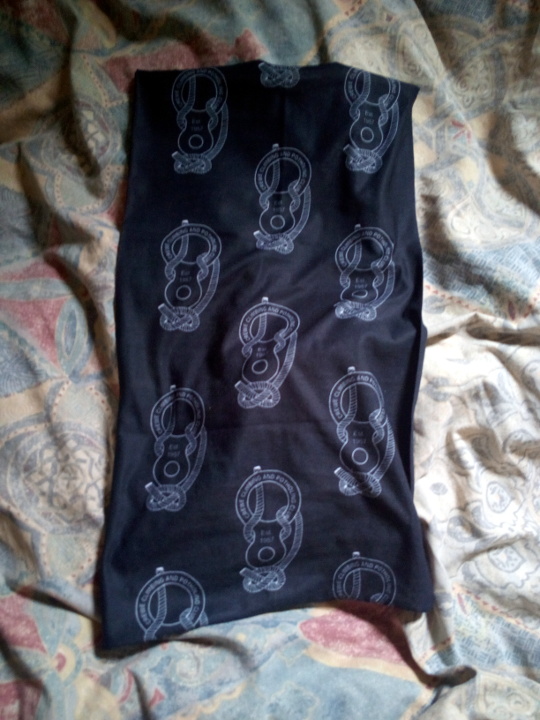 Our esteemed editor has put together another bumper newsletter for our reading pleasure while we are all confined to barracks. Find it on the newsletters page.

All our club disorganised caving trips are canceled while the COVID-19 lock down is in effect in the UK, starting with the Aygill Caverns trip planned for this weekend.

We are canceling our monthly meetings to reduce the risk of spreading the you know what virus until further notice.

Rigging Guide Version 12.6. A few updates and additions to the rigging guide. From our trip at the end of February we took notes to create a rigging top for the extensions to Rowter Hole from Gin Shaft to Crystal Orechasm. From our trip at the end of last year, we had enough information to create a rigging topo for Day Shaft, near Matlock There has been a correction to the rope length in to Pearl Chamber in Knotlow.

Two trips and lots of Crewe members and guests underground on leap year day. Eight of us descended Rowter Hole heading to Gin Shaft and the extensions. Lots of tight awkward bits to negotiate, but also some spectacular pitches, especially with the amount of water tumbling down them. Almost like a Dales stream pot in character in places. People turned back at various points, sometimes finding that recent pie consumption had made the squeezes a bit tight, Some members got to Crystal Orechasm and took a look at the current digging areas. It seemed an age for people to prussik back up the entrance pitch, despite us rigging both the straight drop and the rebelay route. The surface was not a place to linger, with a strong, cold wind and later on sleet and snow coming in from the west.

Some photos from Grace.

Three people had an aquatic trip down P8, using a tarpaulin to divert some of the water away on the entrance climb. Many of us meet up at the George in Castleton afterwards for food and drinks.

Rigging Guide There have been updates to the Level 7 / Hope Shaft and to the Hungerhill Swallet topos in the last couple of weeks. The rigging guide is now at revision 12.4.

A trip report from Jenny Drake:

Lots of us in Peak Cavern yesterday. Two main trips. One team doing the "tourist" trip, seeing the best bits of the system, including a novice who recently got in touch with the club. The other team was five strong and went up the spectacular Victoria Aven and explored the SRT route down George Cooper's Aven to the vast Echo Aven, with extensive mud formations on the floor. Lots of loose rock around, so great care was needed. Good to see John Gillet underground. We were mostly all out at near the same time, so met up at the George for a drink after getting changed. Tony Seddon's mobile caving shop was at the TSG, drawing out some of our wallets.

The only caving film in the BMC's 2020 Women in Adventure competition. See if you can spot the CCPC members! Made by Antonia and Andy Freem of SWCC. There is a prize for the most watched, so here it is.

The Level 7 / Hope Shaft topo has been updated to remove the grid references. Locations are now on the Peak District Caving site. We discovered that the grid reference to Hope Shaft was out by over 100m. Something that had not been spotted in all the years that the guide has been in existence! In addition, the Pallet Shaft and Hillside Shaft entrances to Nickergrove Mine have now been added to the Peak District Caving site. If you have a printed copy of the guide, then please visit the guide page and download and print the two pages needed to bring your guide up to version 12.1. Thanks to the DCA's Phil Wolstenholme for helping with this.